Primo Levi in Ferrara: dreams of body and soul 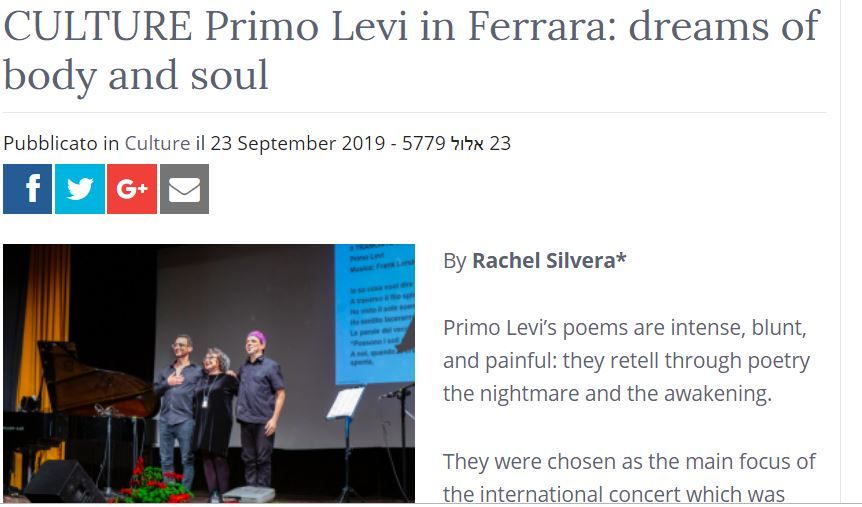 Primo Levi’s poems are intense, blunt, and painful: they retell through poetry the nightmare and the awakening.

They were chosen as the main focus of the international concert which was held in the magnificent Sala Estense in Ferrara to celebrate the European Day of Jewish Culture, whose theme this year was “Dreams – a Stairway to Heaven”.

The concert was organised by the National Museum of Italian Judaism and the Shoah (MEIS) in Ferrara, in collaboration with the National Committee for the Celebrations of Primo Levi’s birth centenary and with the Jewish community of Ferrara.

“We wanted to bring this concert to Ferrara,” explained MEIS Director Simonetta Della Seta, “because we thought it was important to combine Primo Levi’s poems with dreams, which are also the topic of the day, as he had done himself. Their transposition into music is undoubtedly an original and powerful way to convey the author’s message. MEIS is convinced that it is fundamental to make their contribution to the centenary’s celebration.

Originally conceived by Shulamit Ottolenghi, a cosmopolitan singer who is Italian by origin but Israeli by adoption, Shema concert was inspired by ten of the most intimate poems by Primo Levi which were put to music by Klezmatics leader and trumpeter Frank London and by pianist Shai Bachar, who reached Ferrara for the occasion.

Their performances resulted into a harmonious blend of sounds and words which revived Primo Levi’s precious heritage in an original and direct way. Shulamit Ottolenghi’s intense voice interpreted in an innovative but still soulful way many immortal poems, such as “Shemà”, whose verses resounded relentlessly in their deepest meaning.

The dreams of liberty and the nightmares of captivity were told through piano and trumpet solos. They recreated a dreamlike and pending atmosphere which has shaken and lulled the numerous audience.

Translated by Mattia Stefani and revised by Claudia Azzalini, both students at the Advanced School of Modern Languages for Interpreting and Translation of Trieste University and interns at the newspaper office of the Union of the Italian Jewish Communities.