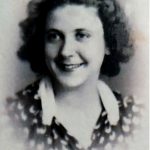 Born in Ferrara in 1918, from an early age, Matilde Bassani was raised on ideals and politics. Her father, a professor of German at the Technical Institute, was fired in the 1920s for his anti-fascist ideals; her uncle, Professor Ludovico Limentanti, signed the Manifesto of the Anti-Fascist Intellectuals and her cousin was the physicist and partisan Eugenio Curiel.
Her professor, Francesco Viviani (also the teacher of the writer Giorgio Bassani) who died in Buchenwald, and the socialist teacher Alda Costa both played an important role in her education.
Having graduated with honors in Literature, together with Giorgio Bassani and Primo Lampronti, Matilde was one of the teachers at the Jewish school in Via Vignatagliata, which welcomed the children expelled from public institutions in Ferrara.
The school in Via Vignatagliata was top notch. In addition to the immortals of Italian literature, the children also studied contemporary poets; it was here that the ideals of freedom and equality were imparted.
In 1943 she was arrested for her anti-fascist activities and taken to the prisons in Via Piangipane (now home to MEIS). Released in July of the same year, she fled to Rome and met her future husband Ulisse Finzi, with whom she shared the decision to resist.
After the war, she made a name for herself as a psychologist and always remained on the front lines, defending rights and holding prestigious positions in the Unione Femminile Nazionale [National Women’s League] and the Consiglio Nazionale delle Donne Italiane [National Council of Italian Women].
When interviewed by Anna Quarzi, President of the Istituto di Storia Contemporanea, in 1997, she said: “From an early age, I was nurtured on milk and anti-fascism. In fact, my family was anti-fascist out of a natural aversion to dictatorships, out of a love for freedom”.