The museum
The building 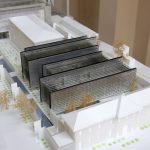 The Museo Nazionale dell’Ebraismo Italiano e della Shoah (National Museum of Italian Judaism and the Shoah) is located in Ferrara, in the former prisons of via Piangipane. The two most significant historic buildings of the original complex have been retained and these will be flanked by modern structures symbolizing the five books of the Torah, the Pentateuch. The MEIS serves as a bridge between past and present, a space intended for culture, the sharing of ideas and freedom.

The MEIS was founded with Italian Law 91 of 17 April 2003, amended by Law 296 of 27 December 2006, to “bear witness to the events that have characterized the two thousand years of Jewish presence in Italy”. A place in which to recount over two thousand years of Italian history and share the universal values of open welcome, diversity and dialogue. The designated city could only be Ferrara, a city in which one of the oldest and most flourishing Jewish communities in Europe had developed.

A prison is by definition a place closed to the world, confined, made for segregation: transforming it into a museum is the challenge we wished to undertake

The former prison in Via Piangipane, decommissioned in 1992, was chosen as the future home of the MEIS. During the war, its walls imprisoned antifascist opponents and Jews, including the writer Giorgio Bassani, Matilde Bassani and Corrado Israel De Benedetti. The challenge was to transform a place of confinement into an open, inclusive space.

Studio Arco and Scape won the international competition for the architectural design of the MEIS. A total of 56 projects were submitted. While awaiting its inauguration, the MEIS organized temporary exhibitions in the small building — which had once housed the penal institution’s administrative offices — the first to be restored in close collaboration with the Ministry of Culture and Tourism and the Municipality of Ferrara. In 2017, during restoration and renovation of the building that housed the men’s section of the prison, visits to the site were organized and the Garden of Questions — a path dedicated to Jewish dietary laws — was created.

December 13th, in the presence of the President of the Republic Sergio Mattarella, saw the inauguration of the MEIS and the great exhibition “Jews. An Italian story. The first thousand years” curated by Anna Foa, Daniele Jalla and Giancarlo Lacerenza. In addition to the initial small building, Building C is now accessible to the public. While maintaining the original plan, its restoration involved eliminating those features that most clearly identified it as a prison — all elements of closure: doors, bars, gates, the gallery — replacing them with a steel element polished to a mirror finish and that also serves to augment the light.

“The MEIS project has placed us in front of a place, a landscape understood in the broadest sense of the term, complex and heterogeneous.”

In addition to the restoration of Building C and intervention on the external walls — which have been maintained, but also rendered “permeable” through a series of openings along the entire perimeter — the project developed by Arco e Scape includes the construction of two modern blocks that dialogue with the restored building of the former prison: Buildings D and B.

Overlooking Via Rampari di San Paolo, Building D will house the ticket office, bookshop and public services and is destined to become the entrance to the Museum in its final configuration; Building B, on the other hand, will house the true and proper exhibition spaces.

Symbolizing the five books of the Torah, the two buildings feature walls of glass, concrete and aluminum bearing inscriptions in Hebrew. All the rooms feature soft, indirect zenithal light through brise soleil solar screens. At the heads of the exhibition blocks, through vertical openings, the city becomes a part of the interior space. The theme of the book, so crucial to Judaism, is reworked and becomes a physical space into which one can enter and immerse oneself.

Restoration of Building C was awarded GBC Historic BuildingTM GOLD certification, recognizing it as a green building, an environmentally friendly building that is sustainable over its entire life cycle: from design to daily use, all the way through to decommissioning, a process that involves the materials manufacturers, contractors and suppliers.

One brick at a time, MEIS is growing with you and each time you return you will discover something different.

The MEIS project will be completed in the next few years with the construction of Buildings D and B. There are plans for the creation of refreshment areas, an auditorium, and both indoor and outdoor social spaces. The area will be a total 9,336 square meters and the museum entrance will be off Via Rampari di San Paolo.