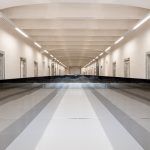 The Museo Nazionale dell’Ebraismo Italiano e della Shoah – MEIS (National Museum of Italian Judaism and the Shoah) was founded with Italian Law 91 of 17 April 2003, amended by Law 296 of 27 December 2006, to “bear witness to the events that have characterized the two thousand years of Jewish presence in Italy”.

This decision recognizes, and enhances, the exceptional continuity of the rich, uninterrupted — but not widely known — path travelled by the Jews, their traditions making a fundamental contribution to the history and fabric of the nation; a cultural contribution wrought between periods of calmer coexistence and fruitful interaction and other tragic times of persecution and banishment, culminating in the tragedy of the Shoah.

In recounting the life experience of a consolidated minority, MEIS serves, above all, as a place of meeting and sharing. Open to all, it is a laboratory of ideas and reflections to stimulate the debate on Judaism, its future in Italy and on the value of dialogue between cultures.

the Statute of the Museum

The purpose was to provide the city and the province with a modern organization able to meet the younger generations’ growing demand for contemporary history and to further improve the quality and raise the level of research.

The Institute’s scientific and civil function is to promote critical awareness and spread knowledge of history. This is based on the desire to enable historical-political groups — both Catholic and laical — to study and get to know each other so they can overcome their preconceptions, clichés and contrived incompatibilities.

The Federation of Italian Jewish Youth established the Centro di Documentazione Ebraica Contemporanea [Jewish Contemporary Documentation Center] (CDEC) in 1955 in celebration of the ten-year anniversary of the liberation of Italy, the fall of the Fascist government of the Italian Social Republic, and the end of Nazi occupation. According to its first by-laws, the aim of the CDEC was “to seek out and collect documents relating to the persecution of Jews in Italy and the Jewish contribution to the Resistance” and to disseminate them. In 1986, the CDEC had grown significantly and was established as the Foundation Jewish Contemporary Documentation Center – CDEC (CDEC Foundation). The CDEC Foundation is the principal institute for the study of Jewish history, culture and life, particularly in regard to the contemporary period in Italy, the Fascist and Nazi persecutions, contemporary anti-Semitism, world Jewish history and the worldwide role of Jewish culture.

The Parco archeologico del Colosseo was established by DM no. 15 of January 12, 2017, with the purpose of creating an institution endowed with special autonomy to ensure the protection and valorisation of the central archaeological area of Rome and to implement the agreement underwritten between the MiBACT and the City of Rome on April 21, 2015.

The territory within the remit of the Park contains both areas and monuments of direct state competence (Colosseum, Domus Aurea, Arch of Constantine and Meta Sudans, the Roman Forum and the Palatine), both in Rome (Circus Maximus, Imperial Forums), as well as the rich ecclesiastical patrimony consisting of the churches that stand on Via dei Fori Imperiali and on the Palatine and its slopes owned by various organisations (Fondo Edifici di Culto of the Ministry of the Interior, Vicariate of Rome and others).

The mission of the Parco archeologico del Colosseo is a constant work of education to memory, expressed in its relationship with an extremely varied public and a commitment to establishing a continuous relationship with the new generations, so relating the origins of our history to the future through the connection with Rome’s whole cultural system.

Since its foundation in 1989 the Association of European Jewish Museums (AEJM) has become a major force in the preservation of Jewish heritage in Europe. Representing more than sixty Jewish museums from all over Europe – from Stockholm to Istanbul, Toledo to Riga, Dublin to Moscow, the Association is actively promoting professional standards and educational activities that help our members to fulfil their task: to preserve the material and intangible Jewish heritage and to create a productive and meaningful discourse about Jewish culture, tradition and history.

The AEJM aims to promote cooperation and communication between Jewish museums in Europe and to assist its members in meeting the challenges facing Jewish museums today. The AEJM encourages the exchange of information and ideas among European Jewish museums, provides opportunities for professional development and promotes mutual support and cooperation in a wide range of areas.