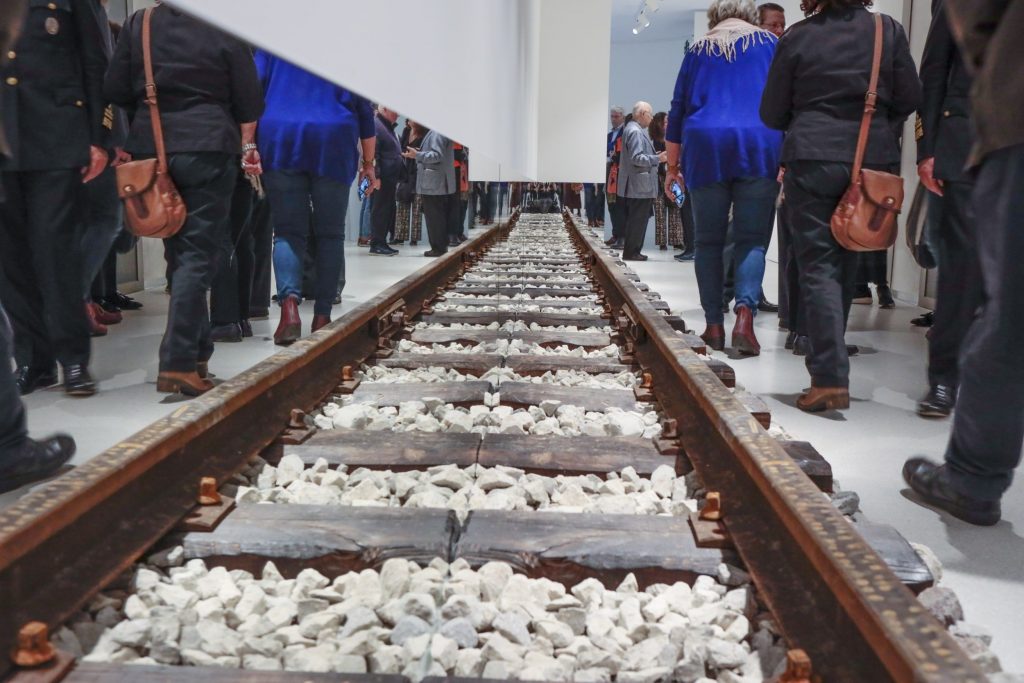 “Excuse me, could you tell us where the Finzi-Contini garden is?”. This is perhaps the question most frequently asked by tourists wandering around Ferrara. And it is always regrettable to answer that such a fascinating and enigmatic place, so lively in the novel by Giorgio Bassani and in the Oscar-winning film by Vittorio De Sica does not really exist. Nor were real the voices, tennis games, bike rides, rare trees and flowers, impossible loves and lives interrupted by the racial laws.

A casual meeting with a group of tourists, in fact, inspired the world-famous artist Dani Karavan to give the consistency to a garden living only in literary and film fiction. His project is at the center of the exhibition “The Garden that doesn’t exist” opening at the National Museum of Italian Judaism and the Shoah – MEIS in Via Piangipane 81, in Ferrara, on October 31st.

“I first came to Ferrara in 1956 to see the frescoes by Francesco del Cossa and Cosmé Tura – says Karavan – and I fell in love with the city. I have been back many times and in the ’80s I met Paolo Ravenna with whom there has been an immediate friendship. Thanks to him I discovered Jewish Ferrara and Giorgio Bassani. The idea of “The Garden that doesn’t exist” came when I saw a group of Americans looking for the Finzi-Contini garden behind a wall in Corso Ercole I d’Este, without finding anything. I asked Paolo and he told me that the garden was the result of the writer’s imagination”.

“Why, then, not to create just in that wall an entrance into the void, into the garden that is not there? A suggestion, gradually clarified, outlined, populated with objects in my mind. So the railway has the dual function of physically accessing that place, now no longer just mental, and to remind the tragic fate of the many Italian Jewish families who by train where deported by the Nazis to Auschwitz and other concentration camps. There will be a bicycle“, a reference to Bassani and his friends – explains Karavan – going around Ferrara on their bikes, just like his alter ego Giorgio and the other boys and girls in the book. A ladder alludes to Giorgio’s desire to climb beyond the wall of the Finzi-Contini property to meet with Micol, the young and elegant woman he had fallen in love with when he was still a child. Facing it, a glass wall will show several extracts from the pages in which Bassani describes the garden, in all the languages in which his novel has been translated.

In the layout designed by Noa Karavan, alongside the model and various installation materials designed by her father Dani for Corso Ercole I d’Este, there are the original manuscript of “Il Giardino dei Finzi-Contini” (courtesy of the Municipality of Ferrara) and an itinerary through some of the more than fifty site specific works signed by the Israeli sculptor around the world: the Sinti and Roma memorial in Berlin, the walk about human rights in Nuremberg, the homage to Walter Benjamin in Portbou and the monument to the desert in the Negev.

“I am happy and honored to present “The Garden that doesn’t exist” along with my other works at MEIS – concludes the eighty-eight years old Karavan – I find it very appropriate to illustrate my project here, in the building where Bassani was detained under the Fascist regime. I feel this work as an authentic need that comes from the depths of myself and I can not wait to see it in Ferrara”.

“The Garden that doesn’t exist” is sponsored by the Emilia-Romagna Region and the Municipality of Ferrara, with the support of “BASSANI 1916-2016” National Committee for the celebrations of the centenary of the birth of Giorgio Bassani, Coop Alleanza 3.0, Ferrara Arte, FER and Italia Nostra – Section of Ferrara. Thanks to the Centro Studi Bassaniani and the Fondazione Giorgio Bassani.

Bilingual catalog, in Italian and English.