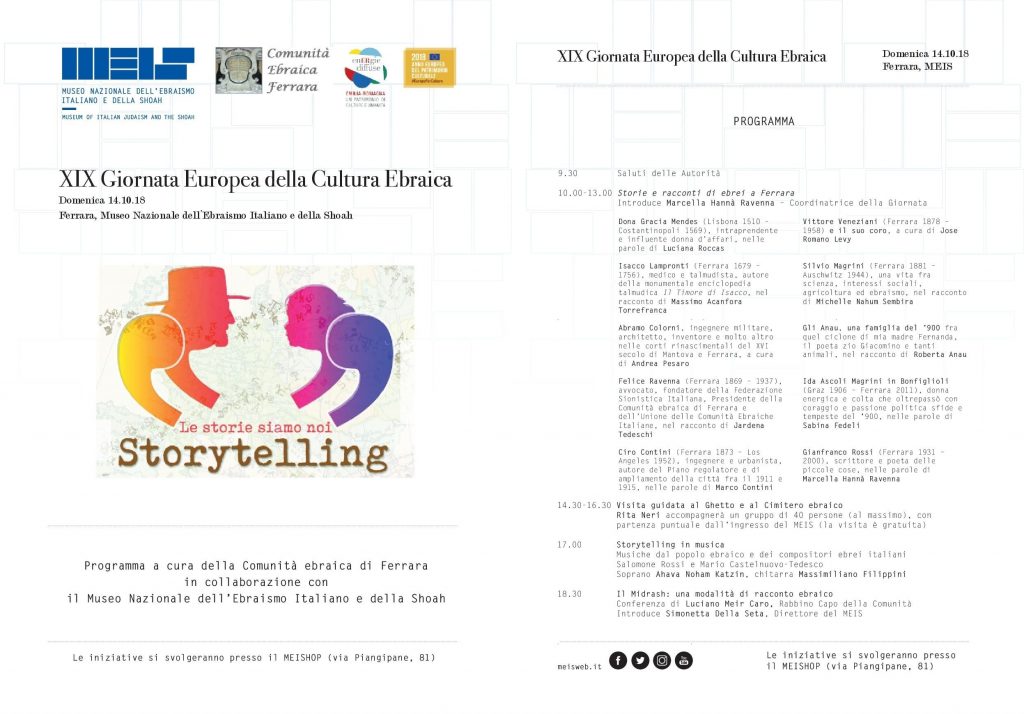 On Sunday, October 14, on the occasion of the 19th European Day of Jewish Culture, the Jewish Community of Ferrara, in collaboration with the MEIS, offers a rich program of initiatives inspired by the theme for 2018: “Storytelling“. A reference to the very origins of Judaism, that root into the ‘stories’ narrated in the Torah, the Hebrew Bible, heritage for the whole humankind.

The EDJC – born in 2000 to make known traditions and customs, synagogues, museums, historical, artistic and architectural heritage of European Jewry – is coordinated by the AEPJ, the European Association for the Preservation and Promotion of Jewish Culture and Heritage. Twenty-eight countries will participate this year and for Italy the promoter is the Union of Italian Jewish Communities – UCEI, with the aim to spred the knowledge of history, traditions and culture of the Jewish minority, attested in the Peninsula for over two thousand years. Eighty-seven locations have answered the call, involving fifteen regions, with Genoa as leader city.

In Ferrara, the events will take place at the MEISHOP in Via Piangipane 81, with an interweaving of brief narrations on some central figures of Ferrarese Judaism, followed by a concert and a conference. Free guided tours to the Ghetto and the Jewish Cemetery are also scheduled, in the afternoon.

9.30 am – The authorities will welcome the public, followed by an introduction by Marcella Hannà Ravenna, coordinator of the event.

10 am until 1 pm – Dona Gracia Mendes (Lisbon 1510-Constantinople 1569), influential and enterprising business woman, in the portrait of Luciana Roccas, Isaac Lampronti (Ferrara 1679-1756), doctor and talmudist, author of the monumental talmudic encyclopedia “Il Timore di Isacco”, outlined by Massimo Acanfora Torrefranca, while Andrea Pesaro will focus on the eclectic figure of Abraham Colorni, military engineer, architect and inventor in the Renaissance courts of Mantua and Ferrara in the XVI century.

Felice Ravenna (Ferrara 1869-1937), lawyer, founder of the Italian Zionist Federation, former President of the Jewish Community of Ferrara and of the UCEI, is the center of the intervention of Jardena Tedeschi, while Marco Contini will narrate the personality of his ancestor Ciro Contini (Ferrara 1873-Los Angeles 1952), engineer and town planner, author of the Town Plan and of extension of the Este of the years 1911/1915. Jose Romano Levy will talk about Vittore Veneziani (Ferrara 1878-1958), the most important Italian choir director between the two world wars, Michelle Nahum Sembira will retraces the life of Silvio Magrini (Ferrara 1881-Auschwitz 1944) between science, social interest, agriculture and judaism. Roberta Anau will browse through the pages of her family album focusing on her mother Fernanda, on his uncle Giacomino the poet, and on the many animals that lived in the Anau household.

Ida Ascoli Magrini in Bonfiglioli(Graz 1906-Ferrara 2011), an energetic and cultured woman who passed courage and political passion challenges and storms of the ‘900, will relive in the words of Sabina Fedeli, before a minimalist closing of the morning on Gianfranco Rossi (Ferrara 1931-2000), writer and poet of small things, in the words of Marcella Hannà Ravenna.

2.30 pm – A guided tour of the Ghetto and of the Jewish Cemetery will begin at the MEIS – forty people maximum.