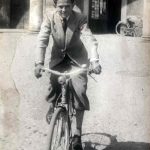 Marcello was born in Ferrara in 1929, the son of Letizia Rossi and Gino Ravenna. For everyone he was Marcellino, who arrived when the family no longer expected him. His older siblings were Franca and Eugene. Paolo Ravenna remembers coming nearly every week to his house to play in the garden on Via Cittadella and, on that occasion, his mother Lucia Ravenna always gave him a lira. He was called the “piazzarot” because he was always in the street, playing with his friends. In 1938 he began attending the Jewish school in Via Vignatagliata, but this attendance was abruptly interrupted in 1943 when Italy moved from persecuting the rights to persecuting the lives of its Jewish citizens. In giving witness to Enzo Biagi, his teacher Matilde Bassani described him as a fair, handsome child with two large, velvety sweet eyes whose hurt feelings prevented him from performing well at school. At the end of November 1943, leaving his brother Eugenio in the prisons of via Piangipane, the family was forced to flee Ferrara and tried to reach Switzerland. Although they managed to cross the border, they were turned back, arrested in Domodossola and then escorted to the prisons in Ferrara. On February 12 they were transferred to the Fossoli camp. From here, on February 22, approximately 500 people were deported. We know nothing about Marcello either in the previous phases or during this anguished journey until what happened upon his arrival at the ramp in Auschwitz Birkenau. (Story told by Marcella Hanna Ravenna)